Audio surveillance is the act of listening to third-party conversations and recording them. This technique is frequently used by law enforcement , private detectives and government spy agencies. Most audio surveillance consists of either bugging a room, wearing a wire, tapping a phone or distance listening. Each provides distinct advantages and disadvantages, depending on the situation.

Placing audio surveillance in “private” areas such as bedrooms, bathrooms or dressing rooms in department stores are typically off limits in all states and regulated by federal law. Just as you wouldn’t place a CCTV camera in a bathroom, neither should you have microphones in there.

A microphone enables CCTV users to not only watch what is happening, but they can also hear what words are being said. Adding audio surveillance capability to your CCTV can help make your business safer, more productive, and secure because it allows owners to hear conversations and helps them protect employees.

A room microphone is another audio surveillance technique that often is utilized. This involves planting a wireless microphone in a room to pick up conversations. Disguised room microphones are available to look like pens, clocks, stuffed animals and a variety of other covert forms. This microphone sends a signal to a receiver, just like a wiretap does, and the signal can be directly recorded. The disadvantage here is access to some rooms and getting only one side of a phone conversation if it takes place in that room.

Audio does introduce additional considerations. For example, video surveillance on public buses are less of a legal issue than audio recording. While being visibly present on the bus is a public event, the conversation between two people seated there is not. Audio recording can be more pervasive in documenting what may be private conversations even though the activity is in a very public place.

Bugs can be installed in a variety of ways. Someone could intercept a shipment of a package for you and install a bug into whatever is in the package. They may be implanted by service professionals, spies on your local information technology team, or just someone pissed off in your office. Audio bugs may also be embedded inside devices, using their power to operate. Bugs needs power to run. If you’ve turned off a device, and it is still drawing power, that may be a reason to be suspicious. 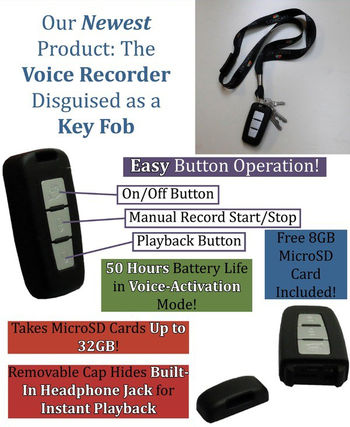 Looking for a voice recorder that can be hidden in plain site, has great clarity, and a long recording time? Then look no further because our Key Chain/FOB Voice Recorder is EXACTLY what you need! This voice recorder can pick up sound up to 65 feet away!

Easily decide which mode you need your to record in: Voice Activated or Continuous.

External Memory. This unit comes with an 8GB MicroSD card (which will hold 120 hours of audio recordings) but it can reach the capacity of a 32GB MicroSd card. Best part? The MicroSD card slot is hidden too!

Long Battery Life. This unit has 10 hours of continuous recording or a 50 hour standby mode.