How does WiLife Pro compare to the retail WiLife System?

The WiLife Pro Video Security System has all of the user advantages of the WiLife retail system including free remote viewing, motion alerts and easy search and playback. It is also a system that has fully integrated cameras, PC software and remote viewing.

WiLife Pro is designed specifically for commercial applications and uses digital IP network communications, using existing or new CAT5 Ethernet cabling. Additionally, the system uses Powered Ethernet, which delivers the power for the cameras on the same line, from the WiLife Power Injector.

Benefits of WiLife Pro include use in very large buildings and spaces, transmitting higher quality video images, and the ability to use Uninterruptible Power Supply (UPS) protection for the system.

Ethernet: The standard local area network (LAN) access method. A specification for “LAN,” “LAN connection” or “network card” automatically implies Ethernet without saying so. Ethernet connects devices to a company or home network as well as to a cable modem or DSL modem for Internet access. Ethernet is defined by the IEEE as the 802.3 standard.

PoE: (Power Over Ethernet) Transmitting DC power to the target device at the end of an Ethernet cable by carrying power in the unused 4/5 and 7/8 wires. It enables access points and other remote devices to be installed where there is no AC power outlet.

LAN: Local Area Network. A system that links together electronic office equipment, such as computers and word processors, and forms a network within an office or building.

Router: Most routers in the world sit in homes and small offices and do nothing more than direct traffic from the network to the Internet. Sitting at the edge of the network, they may also contain a built-in firewall for security, and the firewall serves all users in the network without requiring a personal firewall in each computer. Routers assign IP addresses to devices connected on the network.

Switch (LAN Switch): A network device that cross-connects clients, servers and network devices. Also known as a “frame switch,” stand-alone LAN switches are common in all Ethernet networks. A four-port switch is also typically built into a wired or wireless router for homes and small business. Switches do not assign IP addresses to devices connected on the network.

IP Address (Internet Protocol Address): Every device that is on a network (a local network, or the network of the Internet) has a unique IP number [four sets of numbers divided by period with up to three numbers in each set. (Ie 64.139.27.165)] – If a device does not have an IP address it cannot be on a network.

WiLife HomePlug Bridge (WLPB-100) connects a building’s powerline network to the customer’s LAN. The module is plugged into a standard AC outlet near the user’s switch/router then connected to an open port on the LAN. Instantly, the two networks become one and the WiLife Video Security System will be able to communicate with Standard and Pro cameras.

WiLife Command Center Software (WLPS-160) is the heart of the WiLife Video Security System. It provides simultaneous viewing of up to six cameras at a time with sixteen user-configurable motion zones and motion sensitivity for each camera. Alerts can be sent to email and smart phones. Powerful search tools easily manage recorded video. Secure remote viewing from any Web browser.

· Router with sufficient open ports for your cameras. If you need more ports add a switch to increase the number of available ports. 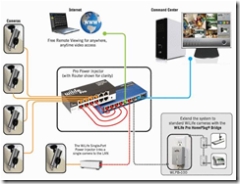 The installation process is simple. With a basic knowledge of networking just about anyone can setup the WiLife Pro Video Security System. Follow these 5 Easy Steps.

After installing the software and restarting the computer, the First Run Wizard will help configure the system the first time you run the software.

IMPORTANT: In the section titled “Tell Us About Your System”, be sure to change the Connection Method to Non-Powerline LAN as shown below. If using a powerline bridge (Hybrid Network shown below) select the second option, Other HomePlug Powerline Adapter. 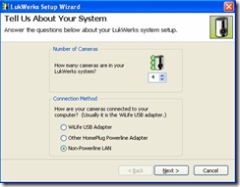 If a customer already has Standard WiLife Cameras the following configuration shows how the power line network can be bridged with the Ethernet network. This allows the Command Center PC to communicate with cameras on the power line through the Ethernet.

In the following scenario the user has mostly Standard WiLife Cameras and only needs one camera to be placed at a large distance from the Command Center PC. Instead of buying a 6-port power injector there is the option of a single port injector.

None of the above configurations use the WiLife USB Adapter. All communication between cameras and the Command Center PC is done over the customer’s personal network.

What are the advantages of WiLife Pro over the Standard Powerline System?

2) Powered Ethernet avoids the need to for finding a power outlet near the location of the camera. The power is provided over an Ethernet cable that may be as long as 300 feet. And, because the camera power is delivered from the possible centralized injector, users can add a UPS, allowing the system weather temporary power outages.

What are the best applications for the WiLife Pro Video Security System?

WiLife Pro is most suitable for homes or businesses that require a professional-grade video security system.

How far away can a camera be placed from the Computer?

Cameras can be placed 300 ft from the Router.

How many cameras will Pro-Line support?

Will Standard WiLife Cameras work when plugged into the port injector?

All cameras plugged into the port injector need to have a “WiLife Pro” logo.

Can I mix Pro Cameras and Standard Cameras in the same system?

There are two methods for mixing Standard and Pro camera systems: 1) Using both USB and network connections or 2) Adding a WiLife Powerline bridge to connect WiLife powerline cameras to your LAN. Using hybrid systems is common as this allows users to mix cameras. For example, they may use Standard Spy and Outdoor cameras, while adding four Pro Indoor cameras for complete property coverage.

How far can the port injector be placed from the switch?

Which versions of the software are compatible with WiLife Pro?

Version 1.6 or later is required for WiLife Pro.

Are Pro cameras compatible with off-the-shelf PoE equipment, such as routers?

Can I connect other PoE networking equipment to my WiLife Power Injector?