Spy Cams can be found that are small as a dime but need a receiver and recorder to enable them to record surveillance video. But there is a real need to have an all in 1 compact pinhole camera and recorder that you can carry around in your packet and be able to be used at a moments notice that can be used for not only covert surveillance but also for fun. Cell phones have cameras them but they can’t record live video and audio.

The PI-SpyCamStick is the smallest high resolution, real time digital spy camcorder ever produced. Easy to use “one touch record” button lets you discretely record any evidence instantly. For the most discrete application, the PI-SpyCamStick can even fit into a standard pack of chewing gum! High quality instant videos have never been easier! Evidence recording has never been made easier for private investigators! Some of the many uses for the PI-SpyCamStick include the following: 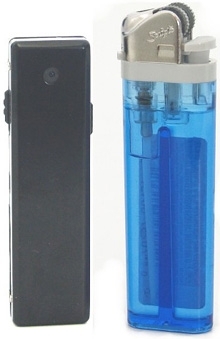 The PI-SpyCamStick super compact video/audio camcorder. Smaller and lighter than a disposable cigarette lighter yet packed with high quality features. SpyCamStick records Hi-Resolution (640 x480) real time (30fps) video via its internal pin hole camera at the touch of a button.

Recordings are stored on a tiny removable Micro SD card. Up to 33 hours of video can be recorded on a 1Gb Micro SD card. Internal rechargeable battery is recharged via USB connection.

Records for over 2 hours on a single charge. Using the new state-of-the-art 3GP third generation format, recordings can be played instantly on 3GP compatible cell phones and PDAs.

Videos can be played on any PC using free download players from Realtime or Quickplayer.

The Spy Cam Stick is perfect for recording theft in a car or truck. No other self contained video surveillance systems exist on the market today other than the Spy Cam Stick. It can even be used in recording classes in high school or college.